A Point in Time Count of homeless neighbors in the South Bay will occur on Tuesday, January 26, 2016. The purpose of the count is to assess the scope of homeless in the South Bay. As many of the homeless are persons with a mental illness, NAMI South Bay is working with the South Bay Coalition to End Homeless to recruit volunteers on this count. For this particular task, the work as a volunteer is to count. It is not to engage or assist. Rather, it is to provide valuable information so that problems can be addressed based upon the facts as they are. For information on how to volunteer please go to 2016 Homeless Count. 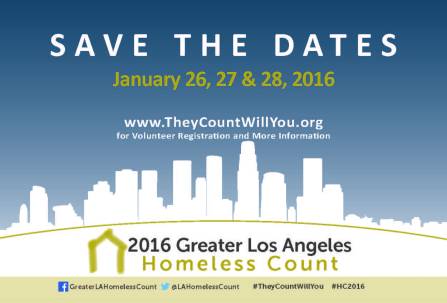 About the Homeless Point-in-time Count

The Homeless Point-in-time Count is led by the Los Angeles Homeless Services Authority (LAHSA), to determine how many homeless individuals and families we have in the Los Angeles Continuum of Care (CoC) on any given night. Over the course of three days and nights, sta and trained volunteers fan across the Los Angeles CoC and count the number of homeless persons, identify their demographic characteristics and the locations where they reside. In 2015, the Greater Los Angeles Homeless Count was the largest homeless census in the country. It engaged more than 5,500 volunteers who counted 89 percent of Los Angeles County’s census tracts – a powerful showing of hands-on community engagement. And now we’re going annual – to help capture ever-more timely data to support the delivery of services.