We will be showing the video documentary “Ride the Tiger- A Guide Through the Bipolar Brain” at our August 20, 2018 meeting. The video tells the the stories of highly accomplished individuals who have been diagnosed with bipolar disorder. The documentary seeks to find out where the biological breakdowns occur and how we can possibly preempt, fix, or rewire our brains back to recovery.

Patrick Kennedy, Patty Duke and Dr. Phil Insell are a few of the featured speakers and story tellers. Please join us for this informative viewing and discussion.

The meeting will be at 7:30 PM in Faith Hall at the First Lutheran Church, 2900 Carson Street, Torrance. Our Family Support Group will meet at 6 PM in the small room off of Faith Hall.

Our general meeting is at 7:30 PM Monday, April 16 in Faith Hall at the First Lutheran Church 2900 Carson in Torrance. Our Family Support Group will meet at 6 PM in the small room off of Faith Hall. 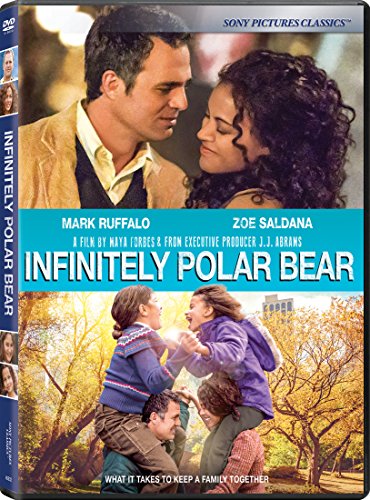 Please come and join with your NAMI South Bay friends to view “Infinitely Polar Bear” movie. Infinitely Polar Bear is based on a true story and is a funny and heartbreaking portrait of the many unexpected ways in which parents and children save each other. After Cam Stuart (Oscar Nominee, Mark Ruffalo) has a manic breakdown that lands him in a mental hospital, his wife Maggie (Zoe Saldana) and their two young daughters are forced to move into a cramped apartment in Cambridge. Broke, stressed and overwhelmed, Maggie leaves for New York to complete her MBA and build a better life for their daughters. With his wife away in New York, Cam quickly realizes that he is in over his head.

The Caring and Sharing Support Groups will meet at 6 PM and the regular meeting (now a movie night) will meet at the First Lutheran Church, 2900 Carson Street in Torrance.

From the Friends of the Semel Institute: Katie Holmes and Luke Kirby play a pair of New Yorkers who both live with bipolar disorder in Paul Dalio’s debut film, Mania Days. The couple meet in a psychiatric hospital and begin a romance that brings out all of the beauty and horror of their condition.

Dalio wrote, directed, edited, and composed the music for this feature film which deals with many of the issues he tackled while trying to find a balance with his own bipolar disorder. Touched With Fire, which also stars Christine Lahti, Griffin Dunne and Bruce Altman, premiered at the 2015 South by Southwest Film Festival. Spike Lee is the executive producer.

Admission is free but reservations are required.

Parking is available for $12 in Structure 3 (see map)

There are many groups and organizations other than NAMI that share information about mental illnesses and do their part to help raise awareness, end stigma and address, with clear vision, the real issues mental illnesses raise. One group that provides free updates in the form of a newsletter to anyone that requests it is Bipolar Network News (BNN). BNN is a newsletter publisher and online clearinghouse of information about mood disorders, and a quarterly print and email publication.

BNN regularly provides updates on the latest research about bipolar disorder in the hope of shedding light on emerging trends in research and treatment to help educate patients, family members, interested laypeople, physicians, and other field professionals. The newsletter is available free of charge to all who request it. You can visit BNN’s website and request an email subscription by CLICKING HERE, or request a postal subscription HERE.

In the new, award-winning movie, Infinitely Polar Bear, Mark Ruffalo plays a father whose bipolar condition affects all or most of his life, from an inability to keep a steady job to bold wardrobe choices. Of his character, Ruffalo says he has “one foot on the banana peel and the other on the grave.” It a “real tightrope act.” Ruffalo, 47, had little difficulty accessing the character. He says manic depression “runs in the family,” and that he has personally suffered occasional bouts of depression.

“I have close family members who are manic and weren’t diagnosed until later in life. Yes their behavior at times will get extreme, but no one was ever looking at it like that. It’s on a scale, it slides around, and you never really know if they’re in mania, or they’re just happy, or they’re sad, or they’re deeply depressed. Sometimes you think it’s like a movie, where you turn the switch on and turn the switch off, but it isn’t like that. It’s more like a dimmer switch.”

In the film, the dad comes around. He gets more regular on his medication and temper tantrums reduce, permitting his daughters to finally see him as the mostly harmless, lovable weirdo he is.

NAMI is pleased to announce that Dr. Marsha Linehan will be one of the outstanding speakers who will join 2,000 NAMI members at the 2015 NAMI National Convention in San Francisco this July. Scheduled to speak on Monday, July 6 in the “Advancing Recovery” track, Dr. Linehan will share her latest research on dialectical behavior therapy (DBT), including the results of her latest study. In this study, Dr. Linehan and coauthors set out to evaluate the importance of the skills training component by comparing three treatment groups: skills training plus case management to replace individual therapy; DBT individual therapy plus activities group to replace skills training so therapists instead focused on the skills patients already had; and standard DBT, which included skills training and individual therapy. The authors found that all three treatments reduced suicide attempts, suicide ideation, the severity of intentional self-injury, use of crisis services due to suicidality and improved reasons for living. The results also showed that inverventions that include DBT skills training are more effective thatn DBT without skills training. Read the full study.