The possibility of using a blood test to detect depression has been demonstrated by researchers at MedUni in Vienna where they have now used functional resonance imaging of the brain and pharmacological investigations to demonstrate that there is a close relationship between the speed of serotonin uptake in blood platelets and the function of a depression network in the brain.

While blood tests for mental illness have until recently been regarded as impossible, the recent study clearly indicates that, in principle, depression can be in fact diagnosed in this way.

From NAMI California: Suffering from depression is a serious health issue – one that affects between 15 and 17 million Americans every day. Thankfully, a number of different treatment options are now available that can help those suffering from depression overcome their problems and get their life back to where it should be. While medication, healthy lifestyle options, and counseling can all have an influence on one’s depression, one of the most important things for anyone looking to combat their depression is to have a solid support system in place.

That support system should be made up of friends and family who love them and can offer the kind of support that is needed. If you’re one of the many who know someone who is combating depression, you’ll likely find yourself in the position of being a part of a support system. This isn’t something to become stressed or panicked about, however. As long as you understand the basics of helping provide support to a loved one, you can help them overcome their depression in a significant way. There are a few tips that can help you provide the highest level of support possible, and understanding them will ensure that you give your loved one everything they need to overcome their mental illness. Here are some of the keys to being an effective member of a support system:

• Be Patient – It’s important to understand that the problems your loved one is suffering from are very real and not just imaginary. You’ll need to be patient and understanding of their struggle, not judgmental. • Motivate Them – A big part of recovery from depression is getting active and leading a healthy lifestyle, but it can be hard for sufferers to find the motivation to do so. Help them by providing motivation, offering to participate in activities with them, and more. • Don’t Offer Advice – One of the biggest issues that depression sufferers face is the constant barrage of advice from their loved ones. While it is almost always well-intentioned, the fact is that telling them your opinions on how to deal with what they’re feeling won’t usually help – it will only add to the problem. Instead, simply support them in what they’re doing and working through. It’s a better solution, with much better results.

As a loved one, you’ll be a key part of someone’s battle against depression. The points above can help you give them the support they need to win that battle for good. We can help as well. For more information, contact us at NAMI California today.

Please consider joining NAMI. We have free education classes,
we advocate for mental health and we have support.

It’s often difficult to know what to say to someone struggling with major depression. And if you’ve battled with it yourself, you are probably aware of the accidental insensitivity that can often be seen in others that love you and are trying to help. In her Huffington Post article, 6 Things Not to Say to Someone with Depression, Lindsay Holmes interviewed Dr. Adam Kaplan, an associate professor in the department of psychiatry and neurology at Johns Hopkins University, to garner some advice for those close to a person struggling with depression. Said Kaplin in his interview:

“It’s best not to say anything that is going to make them think that what they’re dealing with is because of a lack of coping skills, personal weakness or a character flaw. The worst part of depression is that it narrows the field of vision into a very small tube so they can’t see the options. A lot of it is giving people a hope that things will get better.”

Kaplan said that, while every case is different, there are some general principles to follow, and lists the following six things that should, in most cases, not be said.

Each of these statements, and the reason it should be avoided, is discussed in Holmes’s article, which you can read by CLICKING HERE. Also, in the article, Kaplan suggests that instead of offering perspective, just saying nothing or hanging out with someone for a little while may be a good idea.

“A lot of times it’s just recognizing that you can’t always take someone’s pain away, so it’s just a matter of being comforting. There are certain messages that you do want to put forward. Just knowing that you’re not alone is half battle when it comes to depression, so just being there and connecting will help.”

Possibly as interesting as the article are the comments posted to the article showing reactions that agree and disagree, perhaps proving the point that every case is different. Everyone feels down or sad sometimes, but these feelings usually pass after a few days. If feelings of sadness, hopelessness, and fatigue persist for weeks at a time, you may have depression.

Each year about 6.7 percent of U.S. adults experience depression. Depression often co-occurs with other serious illnesses, such as heart disease, stroke, diabetes, cancer, and Parkinson’s disease. Because many older adults face these illnesses, a common misperception is that depression is a normal part of aging. While depression is common in older adults, it does not have to be a usual way of life.

Don’t let depression dampen your mood this holiday season. Please join the National Institute of Mental Health (NIMH) on Friday, December 20, 2013, from 2 to 3 pm ET for a Twitter chat on depression and older adults. Jovier Evans, Ph.D., who is Chief of the Geriatric Translational Neuroscience Program at NIMH will be on-hand to discuss the topic and answer your questions. Please use the hashtag #NIMHchats to follow and participate in the Twitter chat.

From Psychiatric News Alert: An analysis of studies measuring blood concentrations of zinc has found concentrations lower in patients with depression. The senior researcher was Krista Lanctot, Ph.D., of the University of Toronto, and results are published in Biological Psychiatry.

A comprehensive overview of depression and how to offer optimal care to depressed patients can be found in the new American Psychiatric Publishing book, Clinical Guide to Depression and Bipolar Disorder: Findings From the Collaborative Depression Study. For more on treating depression, see Treatment-Resistant Depression: A Roadmap for Effective Care.

After languishing for years in the shadows of psychiatry’s definition of adult depression, irritability is finally getting some respect again. It’s about time, you might say. A new study has found that people suffering a major depressive episode who reported that they have become grouchy, hostile, grumpy, argumentative, foul-tempered or angry will likely have a “more complex, chronic and severe form of major depressive disorder than those who do not acknowledge irritable feelings and behaviors. 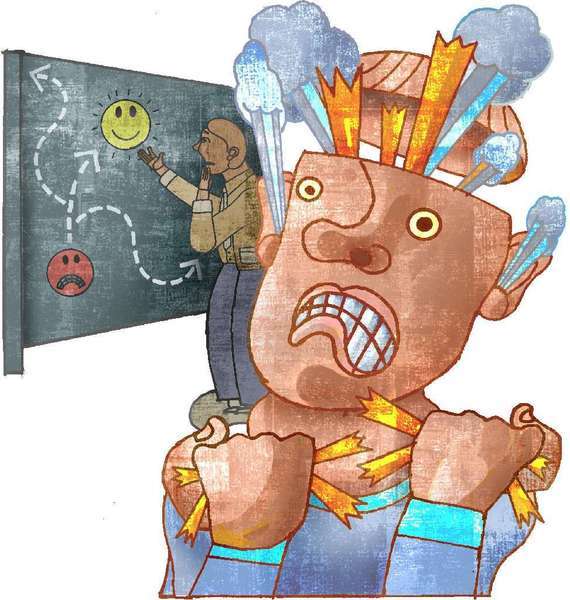 We’re not talking about a small minority of the depressed either: in a 30 year study of 536 subjects who first presented with depression, 54% acknowledge irritability in feelings and behavior.

Compared with merely sad, guilt-ridden and lethargic, the irritable depressed and more severe depressive symptoms. They stayed depressed longer. They relapsed more often and they were more likely to experience other psychiatric conditions as well, including anxiety and substance abuse disorders, impulse-control problems and antisocial behavior, the study showed.

The difference between the two groups was so stark as to suggest that major depression with overt/irritability/anger might be diagnosed and treated as a distinct form of the disorder, requiring more intensive treatment.

The study began in 1978 with 536 adult Americans in 5 U.S. cities researchers interviewed subjects about their symptoms twice a year for the first five years and at least once a year thereafter for an average of more than 16 years. More than 45% of the subjects were followed for more than 20 years.