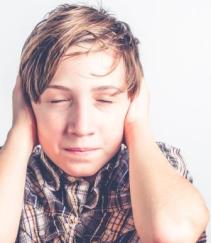 According to a July 2015 article by Anna Medaris Miller for U.S. News and World Report, there are “lots of potential reasons someone might hear voices, including anxiety, stress, depression and a history of trauma.”

Of course, all of these are “good reasons to seek mental health help.” But don’t conclude that a mental illness diagnosis is the only outcome.

In the article, Miller quotes Lisa Forestell, the director of community support at Western Massachusetts Recovery Learning Community who has heard voices her entire life. “They’re playful and silly and they try to cheer me up when I’m sad.” She also quotes Dr. John McGrath, a professor of psychiatry at The University of Queensland in Australia and researcher at the Queensland Brain Institute whose research team found that 2.5% of the population has heard voices and 3.8% has seen something others didn’t see. Psychotic experiences, he says, “are more common than we had been taught. What we really have to do is go back and revise how these symptoms fit into the profile of mental illness.”

This isn’t to say that hallucinations are never a symptom of mental illness. The point really is that hallucinations are a symptom with a variety of possible causes, including mental illness, but possibly also stress or trauma. Dr. Joseph Pierre, co-chief of the Schizophrenia Treatment Unit at VA West Los Angeles Healthcare Center, and also discussed in the article, conducted a study that compared 118 people who hear voices at least once a month and have a psychotic diagnosis to 111 people who hear voices at least once a month but don’t have mental illness. He found differences, including the tendency for people with psychosis to hear voices more often, to hear them express negative emotions. The diagnosed psychotic subjects also had little control over their voices. In his study, Pierre compared hearing voices to coughs — “common experiences that are often, but not always, symptoms of pathology associated with a larger illness.”

To read the article see Living With the Voices in Your Head.